If you thought this has anything to do with long legged Russian models, well, you're partly right. 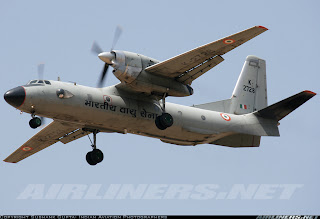 On Saturday (March the 20th), I was making my way past a road that goes close to the threshold of Runway 09, Bangalore HAL airport (the old one, ICAO : VOBG). Under the brilliance of the midday sun, the silence of endless fields surrounding the old airport was broken by a sudden, harsh yet pleasing drone. A black nosed, grey bodied Antonov An-32 zoomed overhead, with its gear down, coming in for a landing. Suddenly, the "clean" aircraft let out thick black smoke from its engines, leveled off, and executed a missed approach. It quickly transitioned to a clean configuration, reducing itself to a small speck in the emptiness of the vast cloudless sky, its presence marked by the thick black smoke that speaks so well of Ukranian design. It was truly a sight to behold.

Very often the Indian Air Force (IAF) conducts practice flights at this airport. And when they do, life around the dull airport transforms beyond imagination.

Few months back, as I was riding parallel to the runway of the same airport, in the direction of the setting sun, golden rays from a majestic sun played hide and seek between the trees on the Old Airport Road, and when these rays failed to hide, golden shafts of light would strike my face, making me sport my best smile!

As I enjoyed this game with the sun and trees, from nowhere came the loud drone of a Russian engine…..and before long, an IAF AN-32, in all its glory, performed a low pass over the runway with its chin lights on: retractable landing lights that add to the beauty of the beast.

And, it didn’t pass without its usual thick black smoke.

The Antonov AN-32 is one long-main landing gear (long leg) Russian Aircraft, which entered service with the IAF in 1984. Now 26 years into service, these handsome beasts are in a class of their own: Majestic, yet coughing for both efficiency and performance. And my editor, who is a retired Air Marshall, used to fly them for the IAF, which happens to be the launch customer of this aircraft.

Says Vovick Karnozov, whom I had the pleasure of meeting personally at India Aviation 2010 (held at Hyderbad),

“Outwardly, the An-32 closely resembles a previous Antonov design, the An-26, from which it had been derived. The major visible difference is two king-sized Ivchenko AI-20D Series 5 engines, each 5180 hp, in lieu of the far more compact 2550-hp AI-24s. The An-26's fuselage, undercarriage and wing were beefed up to sustain higher loads and speeds. Having similar cargo cabin dimensions (inner volume 60 cu.m), the original An-32 featured higher gross weight (27t against 24t for the An-26), higher cruise speed (470-530 against 420-440km/h) and better climb performance (8000 m vs 6000 m in 19 minutes), while showing almost the same range with full tanks (some 2300 km). The An-26 itself had been derived from the An-24RV 48-seat passenger turboprop operational since 1969.

Unlike many other airplanes of the Soviet era, the An-32 was designed primarily for export, most notably for whose air armed forces had a requirement for a light air lifter able to operate from short, hot-and-high aerodromes in the mountain areas (ambient temperatures up to 55 degree Celsius, airfield height above sea level to 4500 m). Such an airplane was of a little interest to the Soviet air force, which had opted for another Antonov design, the An-72 (first flight in 1977, in production since 1985) as its primary lightweight short takeoff and landing (STOL) transport.”

Adds Vovick, “Except for (I believe he meant to say “Apart from”) the outstanding thrust-to-weight ratio and well-tried airframe, the An-32 has a considerable price advantage over competing western designs, with flyaway price of $6-9 million (depending on version) against $12-20 million for the competition.” 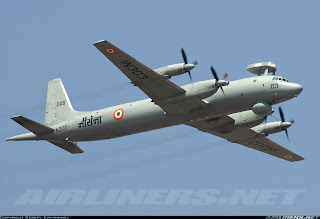 When I shared this small yet sweet smoky experience of mine with Capt PR, who flies the 737 NGs with Jet Airways, and used to fly the Ilyushin IL-38’s for the Indian Navy, he himself had something interesting to share.

“Long back, landing into Mumbai on my ILYUSHIN which has a similar black profile, another aircraft waiting for takeoff had asked “What fuel do you use?”

(BTW, when I editied my post, I realized that the original post had been created at 7:37:00pm. Can you see the Boeing aircraft in this time?)

Both images from Airliners

Posted by TheFlyingEngineer at 19:37